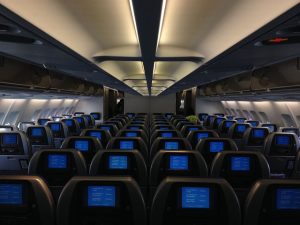 Plenty of stories have been written about how air travel in the US has mostly turned into an exercise in herding cattle.

I still remember when air travel used to be fun… it was flying after all… and you were treated nicely.

Now when you fly, you basically bend over and let the airlines have at it.

That’s one reason that I will be traveling to Austin, TX from Orlando to see the Formula 1 race by car. I just rather rent a car for a couple of hundred dollars and drive the 17 hours. It’s simply just not worth it to get near an airport these days.

But I will be making my yearly trip out to Vegas for Blackhat and DefCon so flying it is.

I ended up booking a flight through my works’ reservation system so I went with the cheapest non-stop flight I could find. Turns out it was Frontier airlines. I airline I have never flown and now know why.

They are billed as a “low-cost” carrier, however they seem to follow the practice of companies like AT&T that advertise low prices and then hit you with all kinds of other charges. Charges that in the long run actually don’t mean low prices.

We all know that most airlines charge for bags these days, however Frontier has a twist where they charge for carry-on instead of checked baggage.

It’s an interesting idea that I don’t totally disagree with since it discourages people from bringing their bags on board which ultimately slows down the boarding of the plane.

So basically you purchase a “low-cost” ticket from Frontier, pay for carry-on bags, unless your feeling in a risky mood and want to check your bags, and then you need to pay for the seat you pick as well.

And I’m not talking about paying for upgrades to first class or a little extra leg room in economy plus. The only seats you don’t have to pay extra for are middle seats in the back of the plane.

I wonder if you can get a discount for riding in a non-pressurized section of the plane. Or how much extra people would pay if that was the default seating area. “Here’s your fur coat and breathing mask.”

From a marketing standpoint, it’s genius… make people pay to not to be uncomfortable (mostly) for hours on end.

And if you want to be mostly comfortable for your flight, you are going to pay for the carry-on and pay for better seats which ultimately means the “low-cost” flight isn’t low-cost anymore.

And all you’re doing is paying typical ticket prices to fly on a carrier that let’s you know up front that it’s not going to do much for you because it’s “low-cost” and saving you money.

Hopefully at some point something like Hyperloop will come along and force the airlines to be fun again.

Last I checked, I don’t think anyone says, “I love flying.” any longer.

One note: when you travel on air carriers outside the US, it hearkens back to days of air travel that was fun.

4-10-17 Update: …and apparently you can add physically assaulting your customers to the list of reasons not to fly any longer. See United Airlines.